There are few things which have the instant ability to divide opinion like double denim. Brexit, Donald Trump, Marmite, they all pale in comparison to the relationship-shattering style move that is the Texan tuxedo.

And who can blame men (and women) for being so vocal in their opposition when the simple pairing of two pieces of denim has caused such infamous style crimes? The case for the prosecution is compelling: there’s Jean Claude Van Damme in that Coors Light ad, everyone at your average American red state rodeo, and (in the most grievous misapplication of denim, ever) there’s Justin Timberlake and Britney Spears who hammered the final nail in the coffin of couples’ dressing with their matching double denim about 15 years ago.

Even the most hardened of style criminals can be rehabilitated, though. And now, all those who have thanklessly campaigned for the style’s innocence are about to reap their reward: double denim is free again.

The moment that we knew that double denim had passed its litmus test was the near universally positive reaction to Brad Pitt’s squared denim Wrangler outfit in the first stills from Quentin Tarantino’s Once Upon A Time In Hollywood. The look is full on, smack-in-the-face-with-a-brick obvious, but somehow it gained wide approval.

Wrangler’s creative director, Sean Gormley, explains the appeal of Pitt’s double denim look: “For me he is evoking the best of cowboy style. Cowboys were the original American heroes and we’re still inspired by their free spirit and rugged sense of adventure, which double denim references.”

Gormley’s point is that, despite its recent reputation for signifying a complete absence of taste, double denim is in fact steeped in heritage and rugged practicality. Whisper it, but we’re talking about a classic style move, timeless in the same way a leather jacket is.

Hold your horses though: there are still many pitfalls along the path to double denim perfection. Below, we list all the rules you need to stick by and offer up some failsafe outfit combinations to help you nail the look.

Not all denim is created equal. We’re not talking about the age old battle between sweatshop threads and selvedge denim, but rather the differences between shades of the same colour. If you’re going to broach all-over blue or black denim, you need some contrast.

Take your cue here from serial double denim wearer David Gandy who makes light work of pairing light blue jeans with a darker denim shirt up top, and vice versa. This move works with black jeans and a charcoal denim shirt too. 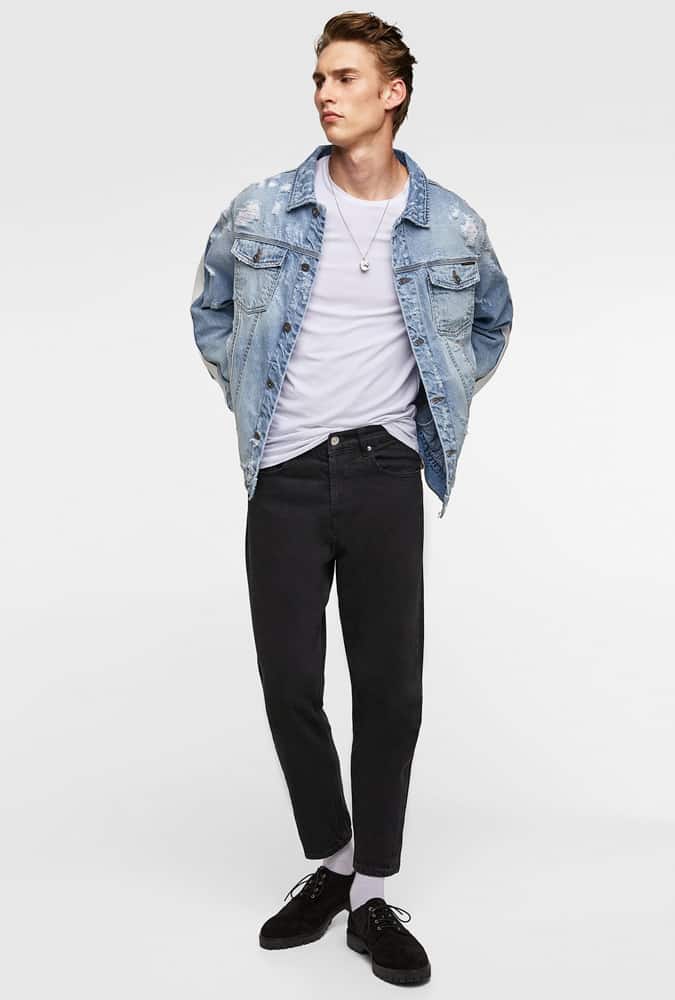 For those stubbornly averse to double denim, adopt some blue sky thinking and ditch blue jeans entirely. Bypassing the colour most closely associated with double denim lets you wear the trend incognito. While blue denim top and bottom can look like you’re dressed in a Levi’s onesie, lesser worn shades (read: grey, green, cobalt blue, red, whites) will stealthily swerve the suggestion that you’re wearing double denim at all.

Using a pair of grey jeans as a base, stick on a pair of hi-tops, a classic white T-shirt and a red (or other primary colour) denim jacket and you’ve just done the James Dean of double denim. If you don’t want to go as bold, switch the coloured jacket with a cream number for a subtle, classy way to do the double D. 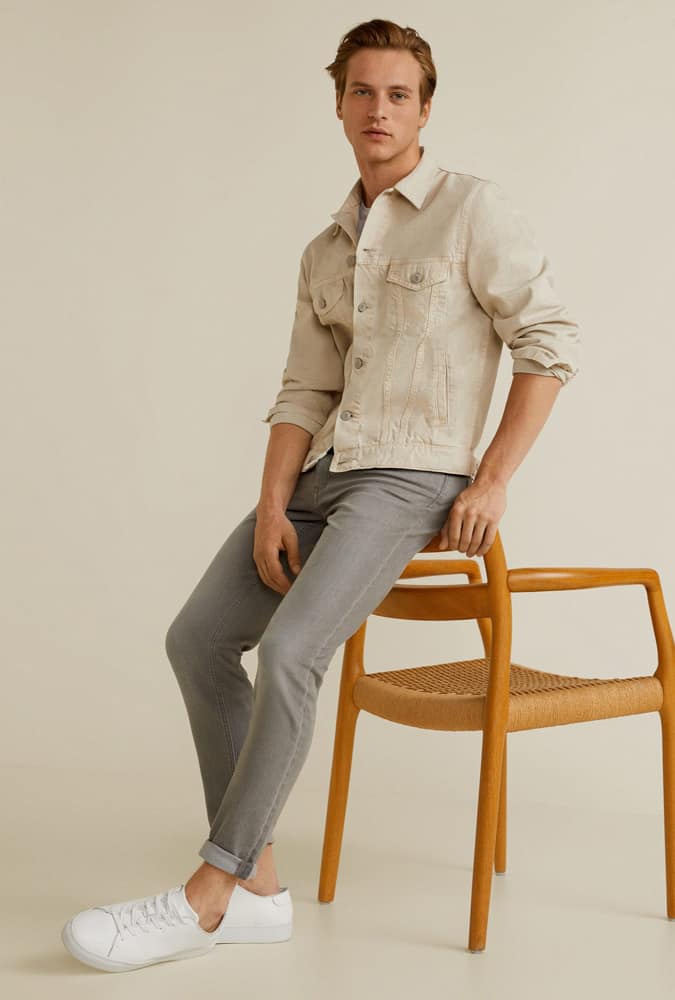 ALWAYS AIM FOR A MIDDLING FIT

Colour combinations are critical when doing double denim justice, but equally important is the fit of the denim you’re wearing. Make like Goldilocks and aim squarely for the middle.

If your skinny jeans could restrict circulation, you’re on the fast-track to 80s hair rock chic. Similarly, go too baggy and you’ll end up loudly emitting Notorious B.I.G. vibes, which is not appropriate for anyone in 2018, rapper or otherwise. A relaxed denim shirt up top and some dad jeans (straight, but not too baggy) are your best best for fit when attempting to don double denim right now. 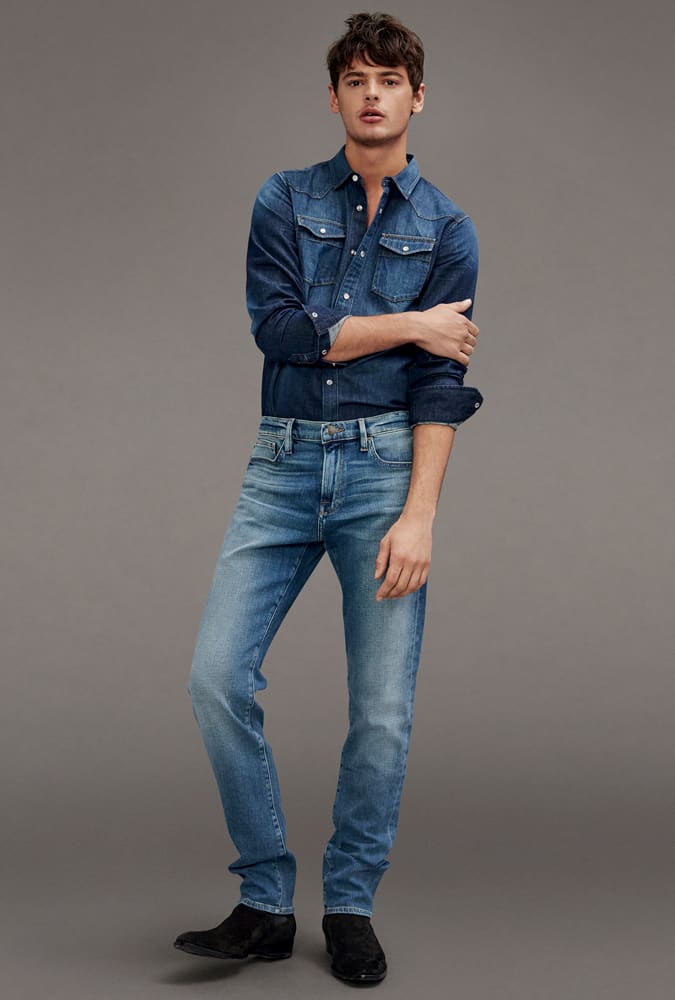 Mention double denim and most minds go straight to full-look stonewash, but swerve cowboy cliche and say howdy to white denim instead. As well as being extremely impractical on horseback, this is one of summer’s savviest style moves.

It goes without saying that any all white look prefers to be sat next to a decent tan. So, if you’re naturally darker skinned or have bossed your base tan, you can recruit white jeans and a white denim jacket without worrying you’ll end up the victim of a more savage wash out than your average British summer time. If you’re naturally paler however, dark stones and creams are your entry route.

All-white plus all-over denim is the kind of thing that is likely to raise eyebrows among the uninitiated, so to break the look up, layer a grey crew-neck T-shirt beneath your jacket and stick on a pair of black trainers to take the edge off a little. Then steer clear of grass, barbecues and basically anywhere that that will turn you into a human paint palette. 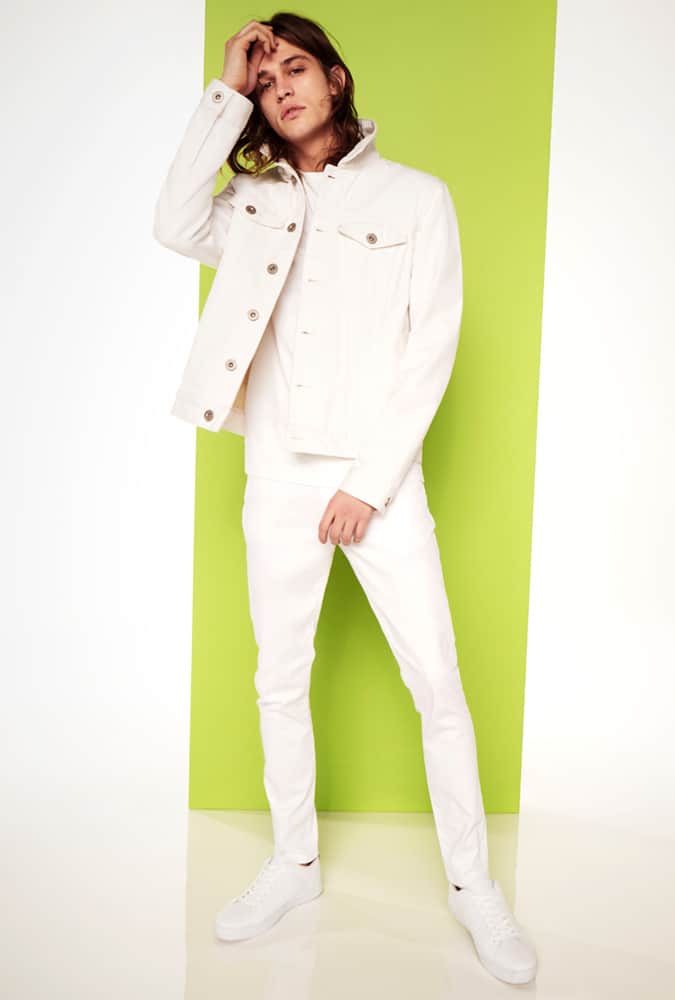 IF IN DOUBT, USE LESS MATERIAL

There’s one obvious reason why denim shorts are easier to use in a double denim look: there’s literally less material than a full pair of jeans, so the impact is softer. The reduction of a few feet of fabric effectively torpedoes any accusations of line dancing chic.

This is a good shout for those who want to dip a toe into the trend without anyone suspecting too much. A white or black lightweight knit and slip-on suede sneakers will dress this outfit up while keeping you looking classy in what is actually a very comfortable, easy-to-wear look. Just avoid any rips, frays, or in fact, any bells, whistles or oversized buckles. 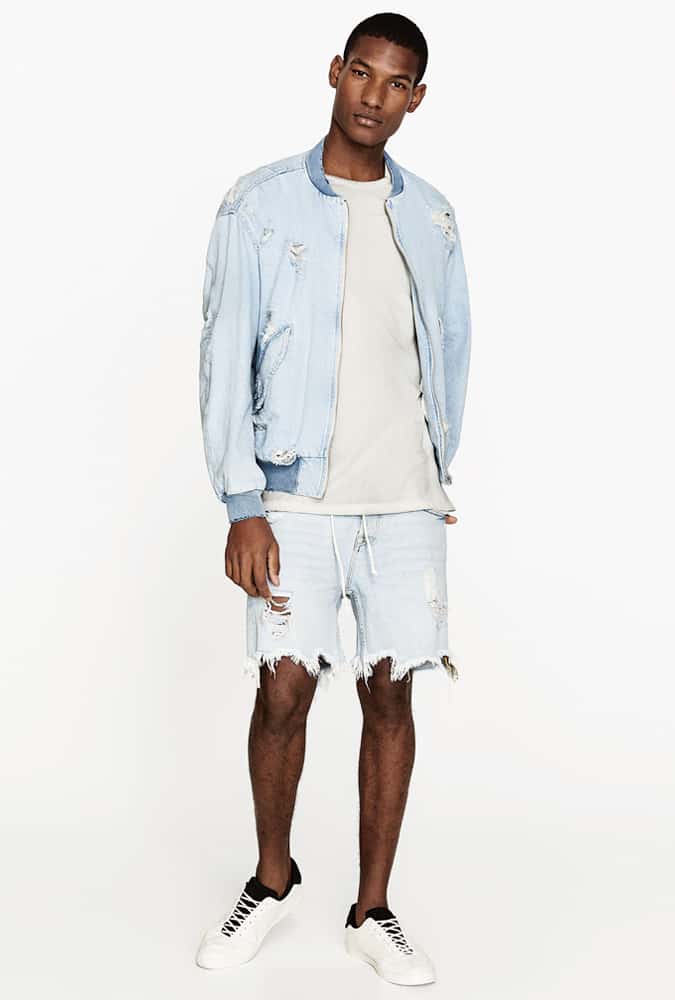 There are two things that, as a general rule of thumb, make dressing a great deal easier: denim and dark colours. So it makes sense, then, that pairing black jeans with a similar shade of jacket would be a reliable choice that works like a suit to elongate the body.

There’s less pressure to switch up the shades of each than when working with blue washes, though as per the rules above it’s a wise choice to break things up slightly with other neutral shades such as white T-shirt or grey jumper.

An entry-level foray into double denim, pairing black jeans with a light wash jacket is the perfect way to get a grunge-inspired getup without needing any musical ability (or a stylist paid for by the record company).

While experimenting with extras such as a borg collar in winter can take it up a notch, it pays to keep both elements as classic as possible. Then all it takes to finish is a crisp white T-shirt and some neat footwear.

Denim’s greatest asset is its versatility, much like the colour combination of black and white. Not just limited to dinner suits and formal dos, a monochrome jeans and jacket outfit is a way to nail double denim with ease.

White jeans (favoured by Mick Jones from The Clash) have been growing in popularity recently. But flip the outfit on its head with an easily removed jacket and darker denim below, and the result is an outfit that can be dialled up or down at a moment’s notice.

Dabbling in double blue denim may strike fear into the hearts of most men, but there are ways to do it with great effect.

As mentioned, the trick is to go at least two shades different on the top and bottom half to avoid the denim onesie effect. Dark raw denim with a light wash shirt work well and can be broken up further by wearing the shirt open and adding in an additional layer in a complementary colour.

The rule that your bottom half should always be darker than your top (as opposed to considering the effect this has on the body’s shape) is as restricting and outdated as saying no brown in town when it comes to shoes.

However, that doesn’t take away from the solid pairing that is dark wash jeans and a light wash jacket. This is an intermediate style move because there’s enough difference between the two pieces that you don’t have to worry about wearing a Texan tuxedo.

White jeans are a great summer wardrobe staple, whether worn box-fresh or a little more beaten up. But knowing what to pair them in can be tricky.

A chambray shirt lends whitewashed denim a touch of ruggedness that it can sometimes be lacking. Just make sure the fit is neat, but not tight, or you’ll risk looking like a sailor on leave.