Of all men’s clothing with a military heritage, the trench coat is the classiest. This perhaps stems from the fact that it is one of the oldest army garments still widely worn, dating from an early 20th century era when you still had to look smart even to go to war. Indeed, when the trench coat was devised – ostensibly as a means of keeping the endless mud off one’s uniform in the trenches of the First World War – it was allowed to be worn only by officers.

Yet, for all that Robert Mitchum and Humphrey Bogart might have re-cast the trench coat as somehow quintessentially American – the trench coat is the noir detective’s coat of choice – it is a British invention, belonging jointly (despite their rivalry over it) to both Aquascutum and Burberry: the former invented the first waterproof wool, devised a field coat for soldiers of the Crimean War and would later corner the Hollywood trench-coat market, for many the definition of the classic form; the later invented gabardine and won the contract to supply a trench-type coat for the Boer War and beyond.

WHAT IS A TRENCH COAT?

Put simply, a trench coat is a three-quarter length coat designed to keep the grime and rain off your finer clothes rather than offer protection like a full-on winter coat would; it was first created with a detachable sheepskin liner – back when the coat was known as the ‘trench warm’ – and still works well over a gilet to the same end.

On the most classic of styles, many of the original details remain. True, the epaulettes, for your insignia of rank, and the D-rings – metal rings attached at the belt from which to suspend your grenades and ammunition pouches – are largely redundant now. But then the storm flap at the shoulder – designed in part to help soften rifle recoil – is also, like the back vent, an arrangement that allows rain water to run off away from the body, rather than into the coat. 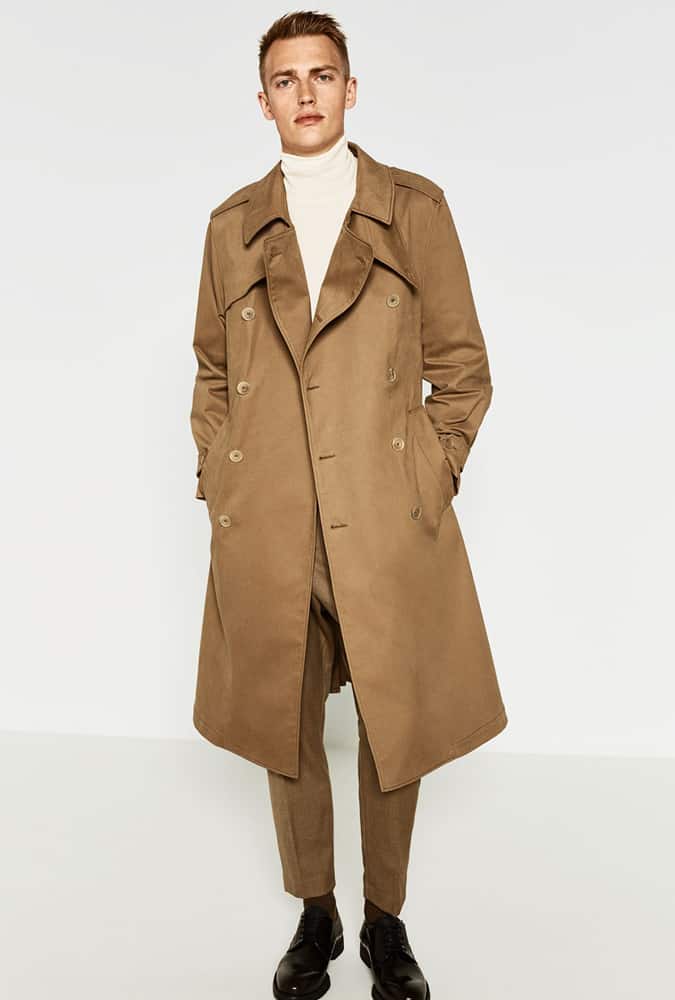 The double-breasted cut provides an extra layer of warmth for your torso and the belt, throat latch and cuff tighteners allow for all hatches to be battened down should the weather turn. The raglan cut makes it easier to get over layers, too.

On its own it might not keep you all that warm, but it will keep you very, very dry – the trench coat was, after all, named after those First World War warrens in which men were exposed to the elements for weeks at a time – but also properly ventilated. The trench coat was the technical jacket of its era.

WHY YOU NEED A TRENCH COAT TODAY

There are multiple versions of the trench coat: short ones and long ones, lined and unlined, in wool or cotton gabardine or khaki drill, poplin or twill weaves – with more expensive options treated for added waterproofing – with more or fewer of those classic details. Some have so few of these, in fact, that they’re more like a mac/trench hybrid. 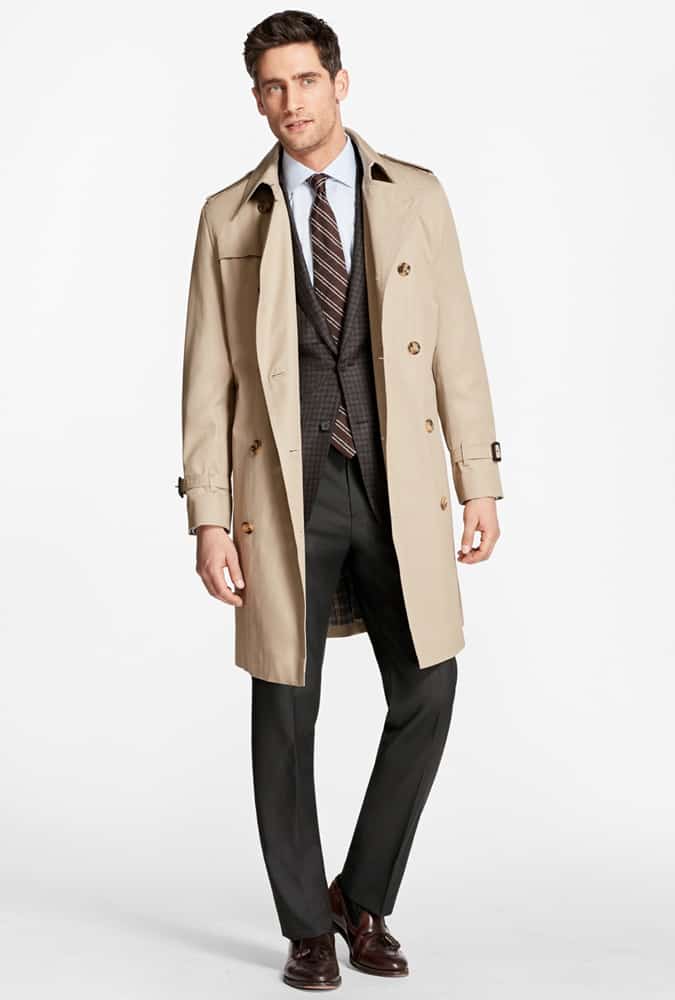 But there’s one reason why this classic style never quite goes away: it works, and arguably more so now than it did a century ago. Since so much of our time is now spent in heated homes, offices or cars (not to mention the rising temperatures of climate change) the need for a seriously heavy coat is greatly diminished.

What’s really most useful is a breathable layering piece, one that, as a vintage Burberry ad had it, can “afford hygienic and efficient protection against wet or chill and prolonged resistance to hard wear”, adding that it was “suitable for every war zone”. With a blanket wrapped around your lower legs, it could even double as an “emergency sleeping kit”. That’s probably arguing too hard for the trench coat’s appeal today, but it does speak to why this style is so cocooning.

HOW TO WEAR A TRENCH COAT

Aside from its practicality – it’s light and waterproof with deep pockets – the trench coat’s other great asset is its stylistic versatility. It’s one of the few coats styles that can easily transition from smart to casual dress – in fact, alongside a mac and overcoat, it’s one of the few coat styles that actually looks right over suiting, providing you don’t attempt to wear a formal hat too. 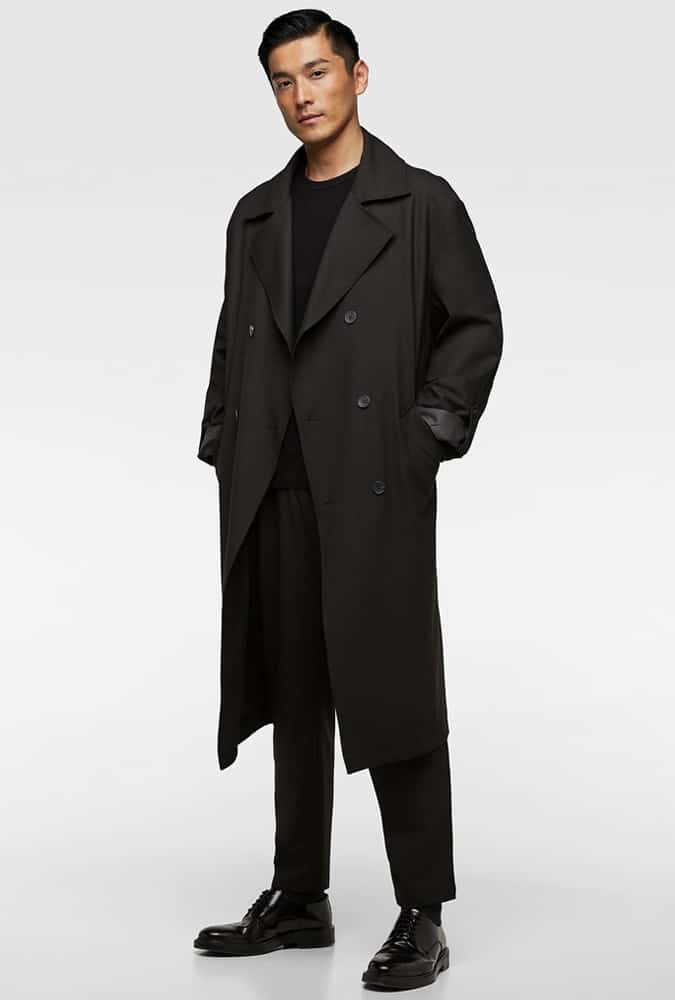 It shouldn’t, but it does look just as at home with a sweatshirt and jeans, in a way that seems very 1960s Parisian student. Worn buttoned up and with a big scarf and the reference is more 1980s football casuals, arguably the first style tribe to embrace the trench coat outside of formal dressing. Trench coats come in myriad colors now, but the most useful are, inevitably, in the traditional menswear shades of navy or black, or – for the trench coat at least – the definitive fawn/khaki.

The trench coat should form a good tailored fit when it’s fully done up, which is to say it should fit at the shoulders and not balloon around the body. That said, bigger men might like to avoid wearing the coat belted – it tends to draw attention to your mid-section – so much as just pulled on loosely over your jacket or jumper.

Length is an important consideration too: aim for a style that is no longer than just above your knee and no shorter than mid thigh. Trench coat fabrics are easily worked with so get your coat taken up if necessary. But don’t be too prissy about it: a trench coat tends to look better the more battered it is.

One of the two brands making the definitive trench coat, Burberry’s is replete with all the original details, but now also comes in three fits – relaxed, for easier layering, classic and slim, the latter being more of a fashion piece. With its signature gabardine made at the Burberry mill near Keighley, this trench coat is also among the more expensive. But then it’s an heirloom piece. 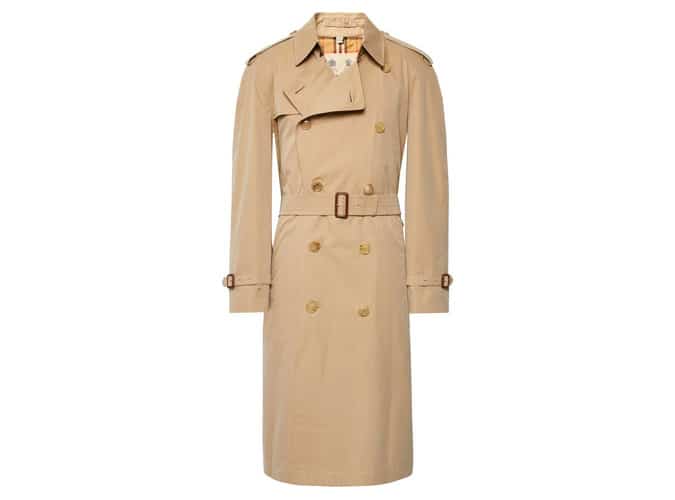 The other maker of the definitive trench coat, Aquascutum’s was the style worn by Bogart in ‘Casablanca’ and Peter Sellers as bumbling detective Inspector Clouseau. Aquascutum’s trench coats are identified by the check lining and slightly oversized cut. Again, it’s not the cheapest, but it is a classic. 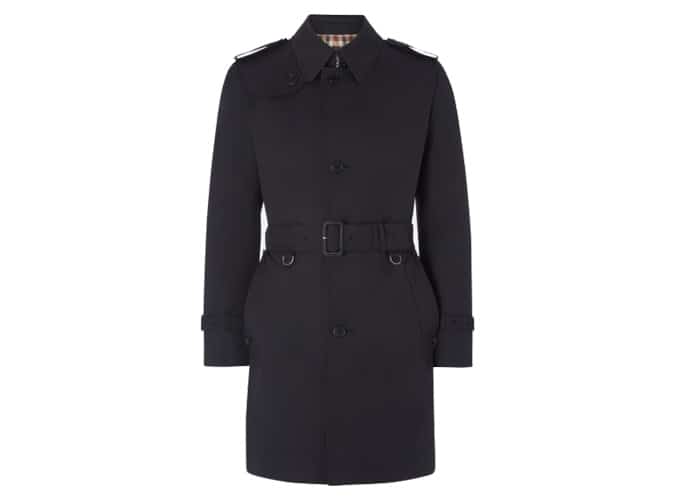 For a hardy staple at an affordable price, Marks & Spencer’s cotton-rich trench coats come with the maker’s Stormwear technology – a cotton and polyester blended fabric coating that ensures raindrops roll away off the garment while allowing it to remain breathable. 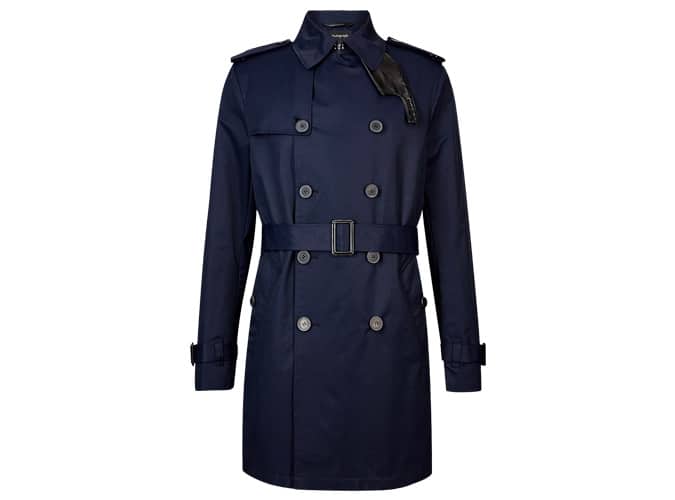 Less well known than Burberry or Aquascutum, but making a similarly top-notch trench coat, Grenfell – which has been providing specialist outerwear to explorers since 1923 – also makes its trench coats from a proprietary, densely-woven cotton cloth. Its trench coats are available with detachable liners too. 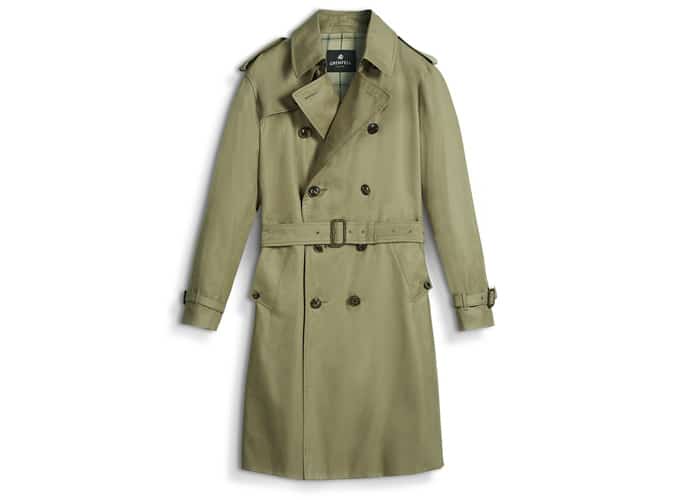 Better known – as its name gives away – as maker of the classic, fuss-free mac, Mackintosh also has its own take on the trench coat. With versions available without the likes of epaulettes or storm flap, Mackintosh’s trench coats might suit those looking for a more streamlined look. 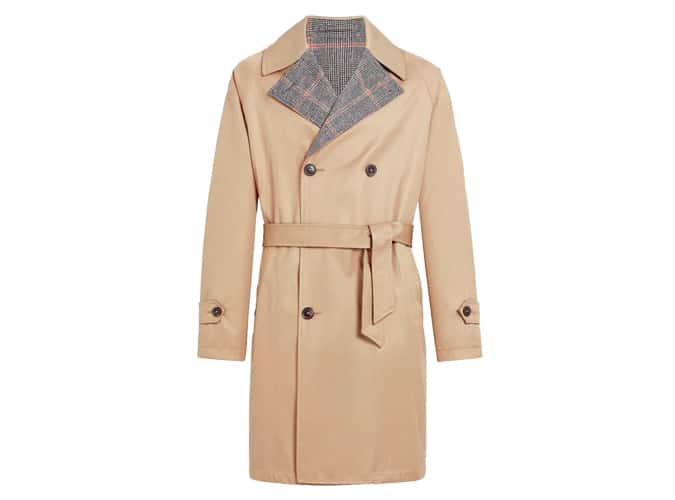 Accessibly priced and with timeless styling, John Lewis’s own brand water- and wind-proof coats lean, more strictly, to the mac style than the trench coat. That said, they do use a bonded cotton blend and host plenty of detail such as button cuff adjustors, and has a versatile mid-length cut. 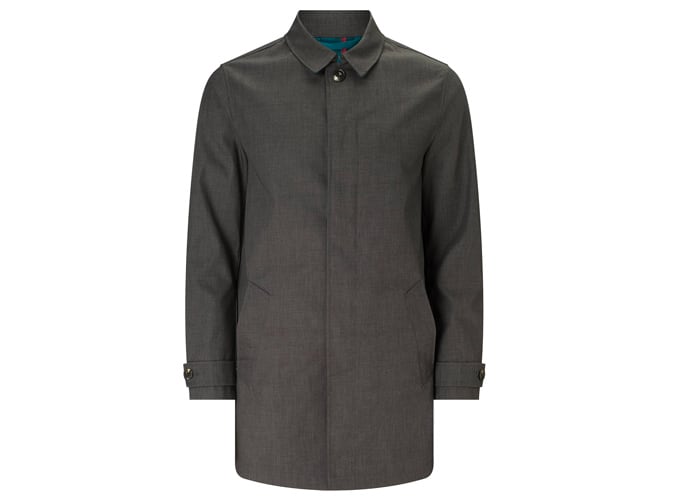 Arguably the go-to brand for a well-priced version of the trench coat with much more of a fashion leaning, what you might lose in technical performance you’ll gain in a shorter, edgier cut. There are still plenty of the characterful details, from the belt to the storm flap. 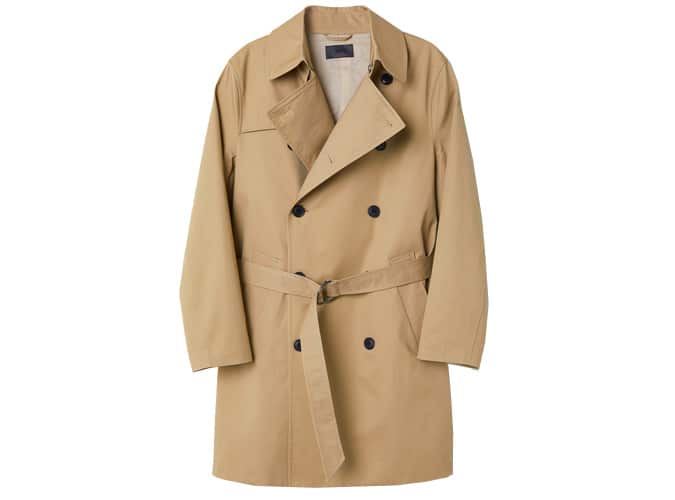 The mid-priced, good value option, British retailer Reiss offers outerwear that goes beyond that of the one-season wonder, and so packs in plenty of extras – a cotton shell might come with a quilted lining, neatly cut vents and a solid, suits-everyone standard fit. 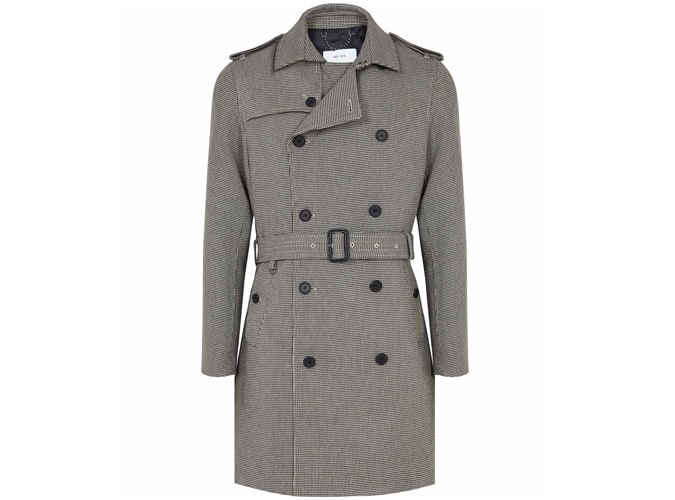 If you’re after a more alternative take on the trench coat, Zara is a good place to look. Its versions might come using concealed fastenings, quilted, oversized, padded, belt-less, extra-long, checked, waxed, in atypical fabrics the likes of denim or a glossy polyester, even minimalistic with merely hints of the original style left. 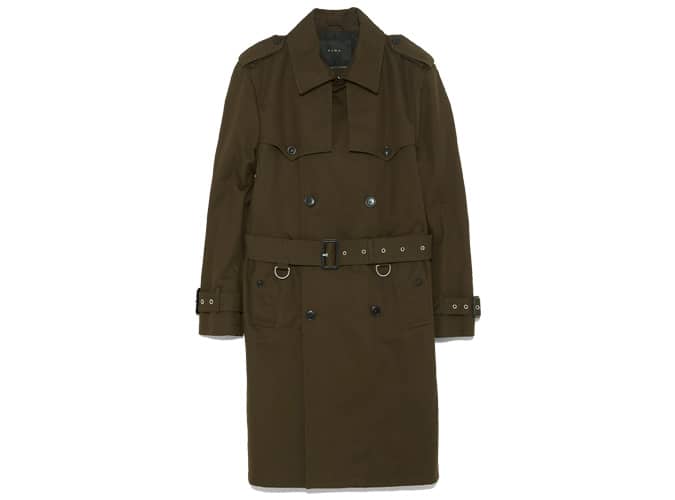