Few things in the male wardrobe are likely to link reigning monarchs and rockstars. Nonetheless, attracting wearers as diverse as this has been men’s Chelsea boots most notable achievements.

Harking back to the 1850s, ankle boots (as they were simply known then) were invented by Queen Victoria’s shoemaker, J. Sparkes-Hall, as an alternative to lace-up riding boots, which were almost impossible to remove unaided. The Victorians were suckers for practicality as well as prudishness so they added a handy elasticated ankle to the riding boot shape.

The name we use today to describe these stylish stompers unsurprisingly hails from London’s well-heeled Chelsea area, where they were the de facto king of footwear during the 1950s and 1960s on King’s Road, be it on the Sloane Rangers that lived there, or the Mod subculture riding through.

It’s little wonder that they went mainstream either, considering they’re one of the most versatile types of shoe a man can own; the sleek silhouette looking just as good polished to a shine as left gently scuffed for a rock ‘n’ roll patina.

Of course, it’s not as simple as just slipping on any old pair, you need to look out for the hallmarks of quality before you reach into your pocket. “The quality of the material is the most important when buying men’s Chelsea boots,” says Dune London men’s shoe buyer, Louise Godding. “Premium, buttery leather will age well and can be polished up easily while adding character to your look.”

When it comes to your suede selection, length matters: in this case, the shorter, the better. “Short-pile suede is a sign of quality and will wear better. Long-pile suede, on the other hand, will get scruffy quickly,” says Godding.

You can learn a lot about the quality of men’s Chelsea boots from the shape of their toes, too. “The curved shape – which is created using heat and pressure on the front of the boot – is key. Any chunky seams or lining creases can rub with wear, so always try them on to check for a smooth finish inside.”

HOW TO WEAR MEN’S CHELSEA BOOTS

As with any menswear item considered a heritage piece, you’ll need to tread carefully when styling to avoid going into turbo toff mode. Gooding’s advice for going more rockstar than rah? “Wear men’s Chelsea boots casually with jeans, a white T-shirt and a ‘thrown-on’ shirt.” Simple.

If you’re looking to sharpen up your act, however, both what you wear and the boot’s ankle height come into play. “A taller ankle height is very on-trend and adds a smarter feel for a sharper look,” adds Gooding. “These look great when worn with slim jeans, a crisp Oxford shirt and a smart wool coat.”

As for where you’ll find the best, here are 15 men’s boot brands delivering on style, substance, and a little more style.

Grenson has established itself as one of the best made in Britain shoe brands, championing quality and classic design over trends. True to form, its men’s Chelsea boots are a masterclass in fuss-free craftsmanship, with each pair taking eight weeks and 200 individual operations to complete. 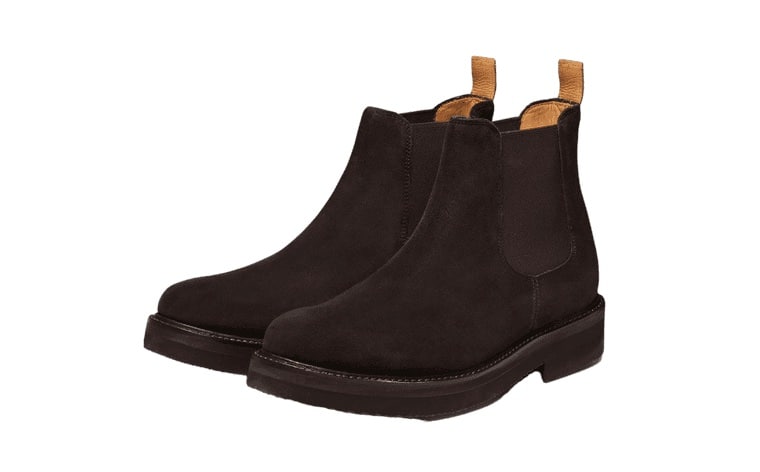 Fans of well-made and comfortable footwear (so that’s everyone, then) will no doubt be familiar with UGG. The footwear retailer’s frankly utilitarian take on men’s Chelsea Boots is refreshing to see against the typical shiny leather style. 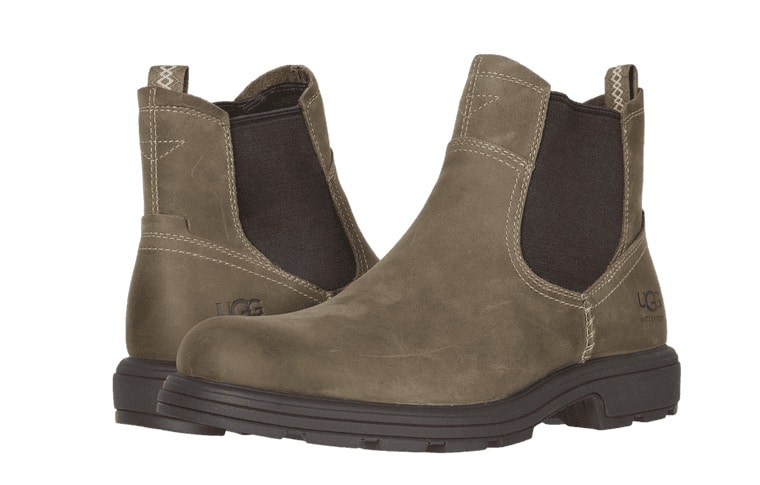 If you thought minimalist sneakers were where the Oliver Cabell canon ended, let us introduce the English label’s equally lust-worthy men’s Chelsea boots. Available in both leather and suede, they’re made with the same contemporary stealth wealth design ethos, while still staying true to their minimalist roots. 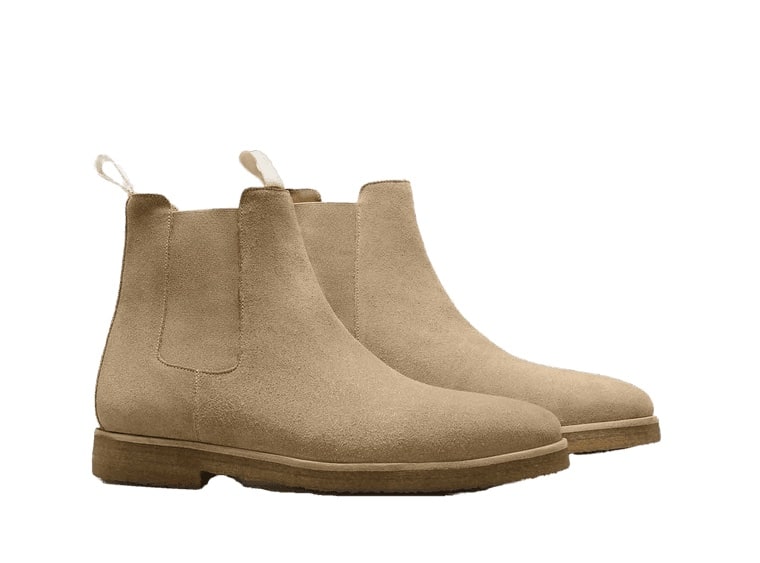 Fast fashion stalwart H&M may be best known for its wallet-friendly wares, but the Swedish firm’s premium line provides the perfect happy medium for those looking to go high-end on their footwear without forking out half a month’s salary. Check out its line of men’s Chelsea boots for swanky stompers at a fraction of the cost that equivalent designer styles would cost you. 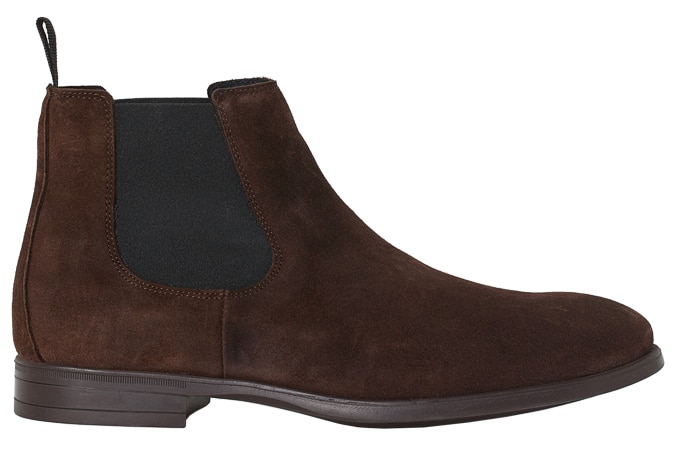 If you’re anything like us, your first meeting with Clarks will have been in the run-up to your first year at school. Luckily though, there’s plenty of footwear on offer that’s adult-friendly too. The brand’s men’s Chelsea boots, like its Chukka boots, deliver the same solid, no-fuss appeal, but with advanced sole technology that also promises unmatched comfort. 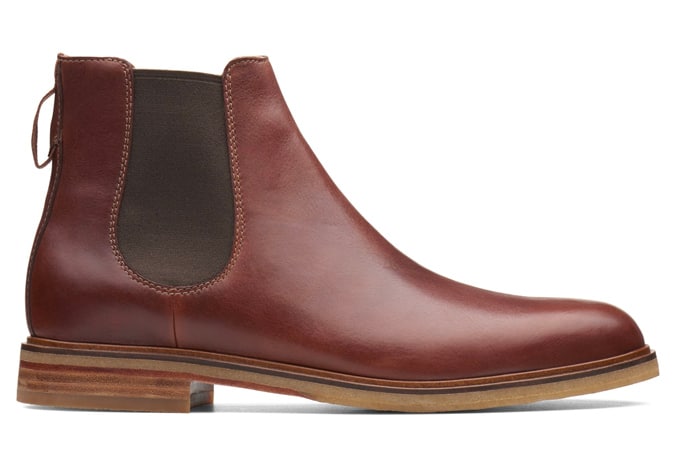 MYRQVIST keeps it on the front foot when it comes to producing footwear that fuses both classic and contemporary design elements. The retailer’s range of men’s Chelsea boots leaves no stone unturned, offering a broad line-up of fresh and familiar takes on this menswear favorite. 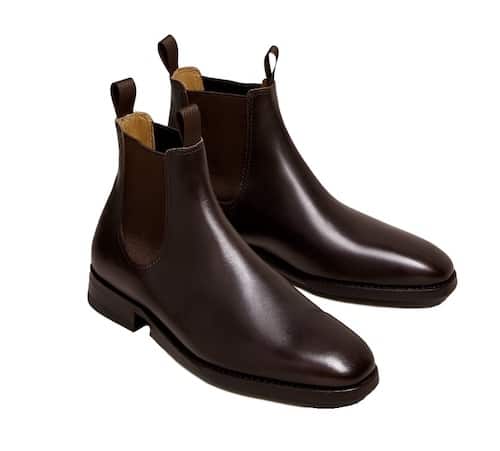 Ask anyone on the street, and they’ll tell you that Dr Martens produces the best shoes in the world, but its comprehensive catalog of rebellious styles spans further than that its iconic 8 eyelet lace-up. The brand’s men’s Chelsea boots take the essence of the original and add some trademark edge to de-gentrify the style. 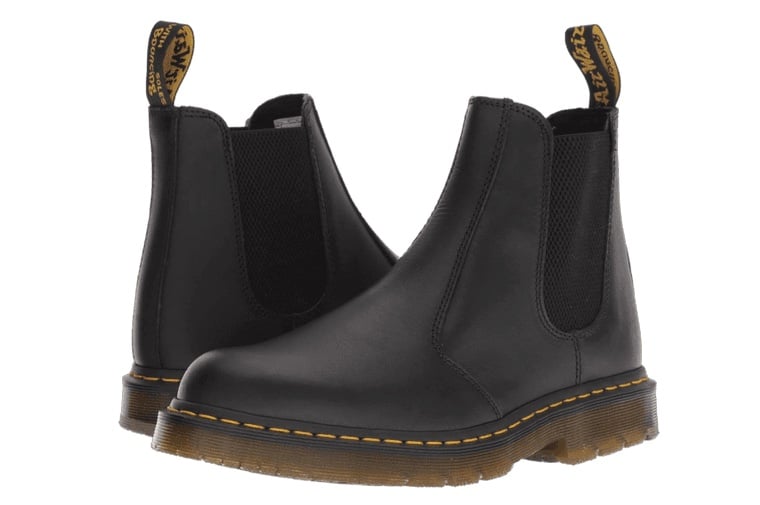 In the quest for the ultimate designer Chelsea boot, the book well and truly stops with Saint Laurent. The luxury brand has made its name on the back of the Hedi Slimane era rock ‘n’ roll aesthetic, and as such, produces some of the best men’s Chelsea boots on the market. Pair with a leather jacket and an IDGAF attitude. 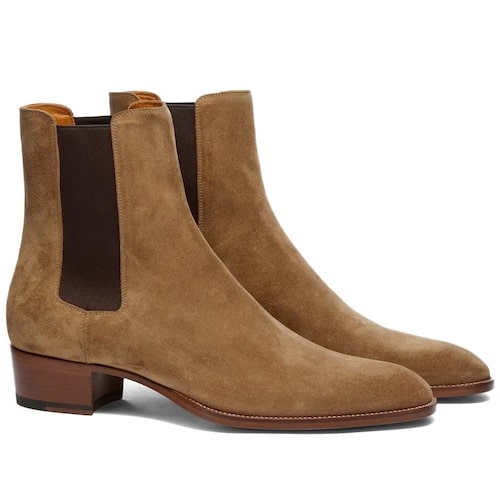 ASOS is pretty much the Aladdin’s Cave of menswear, so whether you’re feeling skint or flush, adventurous or pared-back, it is sure to have a pair of men’s Chelsea boots that will appeal. It’s practically impossible to leave empty-handed (or footed). 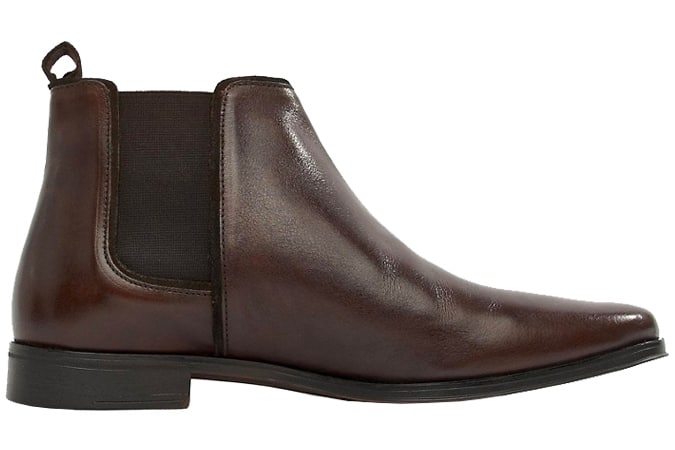 Australian brand R.M. Williams has a history that stretches back to 1932, so flash-in-the-pan footwear this is not. From its assortment of men’s Chelsea boots, expect a typically laid-back Aussie design with impeccable performance underfoot thanks to Goodyear-welted soles. 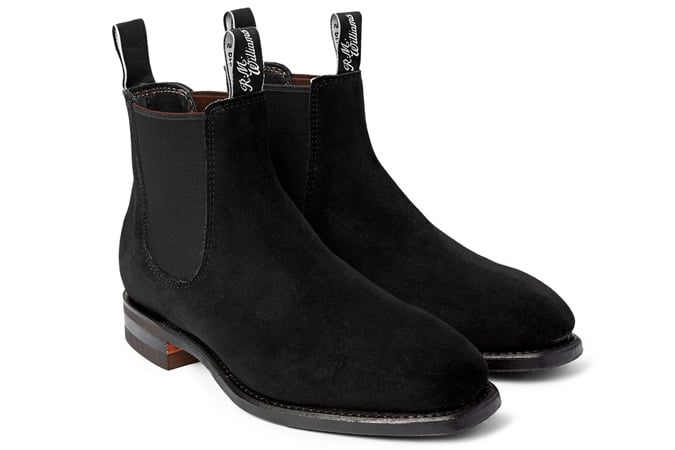 Axel Arigato is another timeless maker in the men’s Chelsea boot world. With Swedish founders, the brand excels at producing footwear that can survive all terrains, while simultaneously looking as stylish as hell. The key to their durability is in the sole, where hard-wearing rubber is created with a textured tread to add higher support and grip. 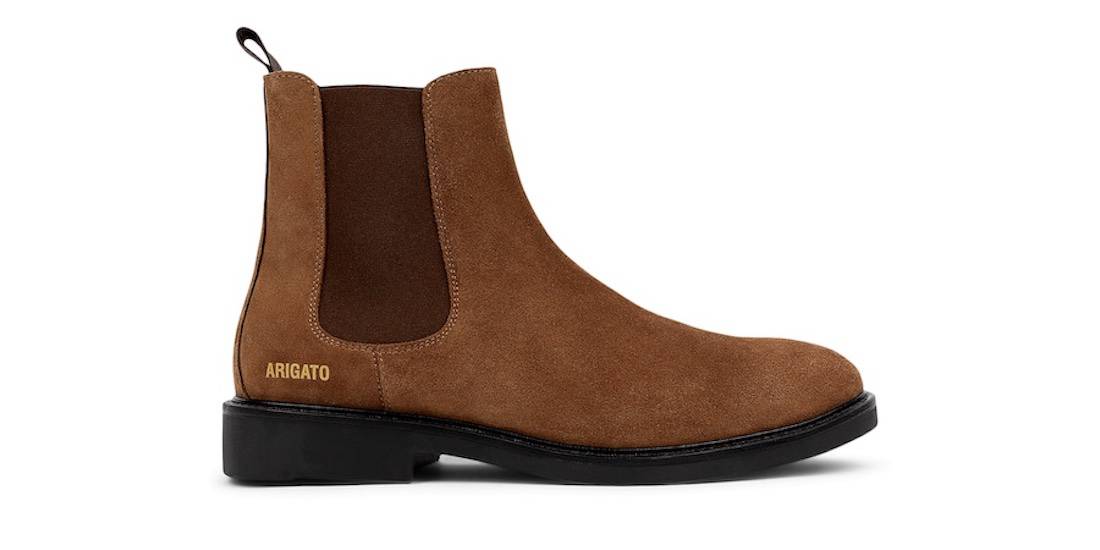 If you’re looking for top-notch smart-casual shoes without having to step off the high street, you can’t go far wrong with Aldo. At an affordable price point for a well-made shoe, the Canadian brand’s range of simple but stylish men’s Chelsea boots are a failsafe option that will slot in with any wintry looks you’re cooking up. 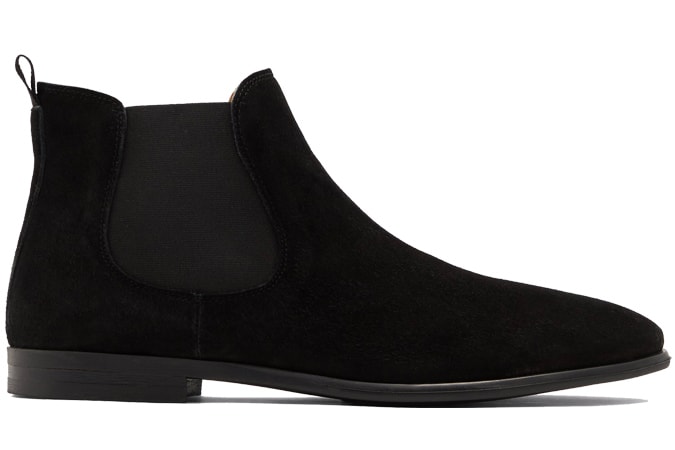 The quintessential Wellington boot brand, Hunter has smartly adapted the festival essential in recent years for the men’s Chelsea boot crowd. Made just like its wellies, using a strong vulcanized rubber to keep your feet safe from the elements, the boots are cut at the ankle for a more stylish way to take on the typically muddy British countryside. 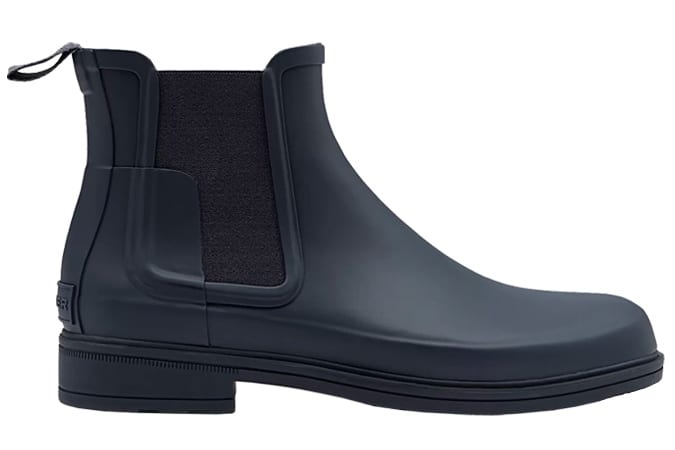 River Island has long been in the game for over 60 years, but there’s nothing outdated about its expertly crafted boots, which take that time-tested knowledge and combine it with subtle design tweaks for the perfect fusion of tradition and trend. 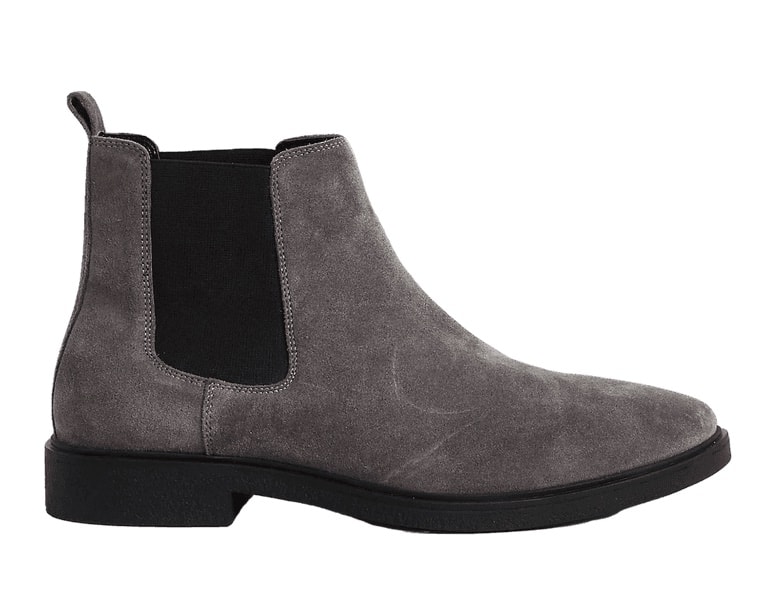 Marks & Spencer’s shoes are one of its best-kept secrets, punching well above their sub-$125 price point when it comes to quality of materials and craftsmanship. Teaming classic design with surprisingly sturdy construction, the retailer’s men’s Chelsea boots offer the kind of style that never ages. 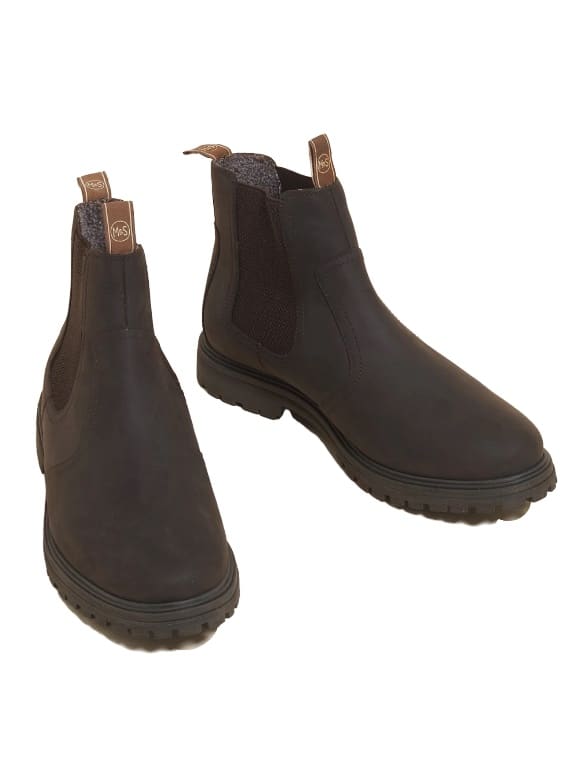 American outdoor brand Timberland is one of the most eco-conscious footwear companies in the world. And it’s this dedication to the cause that led to the creation of its men’s Chelsea boots, which are made out of leather from a Leather Working Group Silver-rated sustainable tannery. As well-crafted as its iconic worker boots, the brand’s tree logo imprint above the heel makes for a neat feature on a traditional shape. 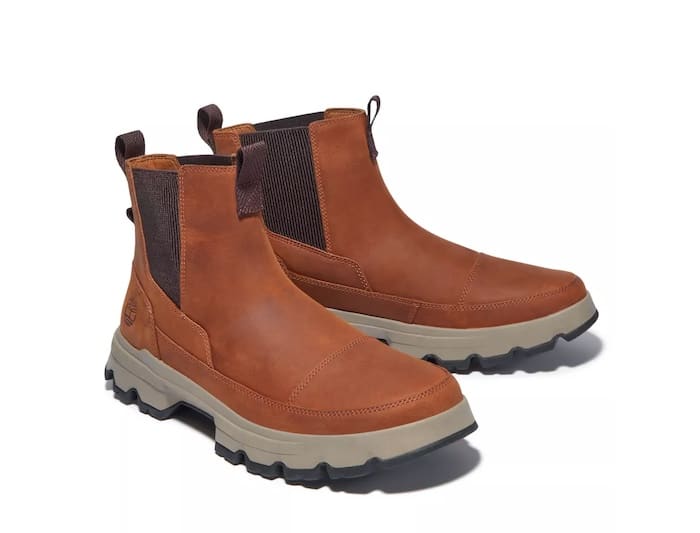 With a history stretching back well over a century, it’s no exaggeration to say that you’re always in a safe pair of shoes from Church’s. For fans of heritage, craftsmanship and obsessive attention to detail, you’ll struggle to find a finer pair of men’s Chelsea boots. 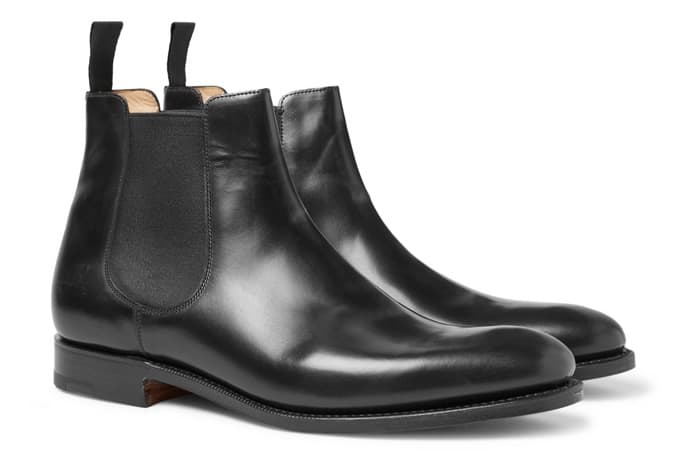 What do Chris Hemsworth, Chris Evans and Miles Teller all have in common? Well, apart from being Hollywood deities, they’re also all fans of heritage American bootmaker Frye. Having previously made shoes for soldiers in the Civil War, expect men’s Chelsea boots made out of rough suede and with sturdy moccasin constructions that go against their posh, polished Anglo cousins. 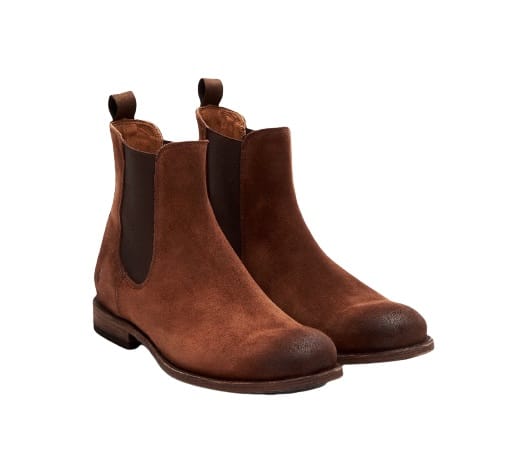 Hugo Boss bootmakers can boast of putting footwear on royal feet the world over. If you’re looking for the perfect men’s Chelsea boots to pair with any outfit, you’d be hard pushed to find a brand with more thumbs-ups from the most discerning of men. 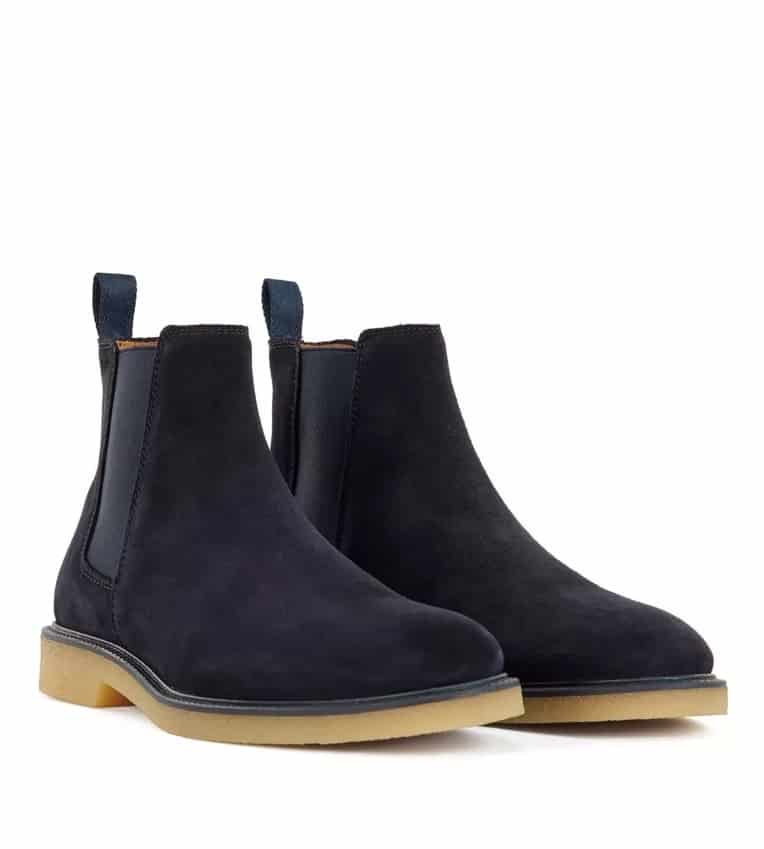 Handmade in the USA, Red Wing’s work boots offering puts good ole American manufacturing front and centre, meaning each pair of men’s Chelsea boots from this stateside shoe supplier have rugged functionality at their core. The fact that they look the part is a welcome bonus. 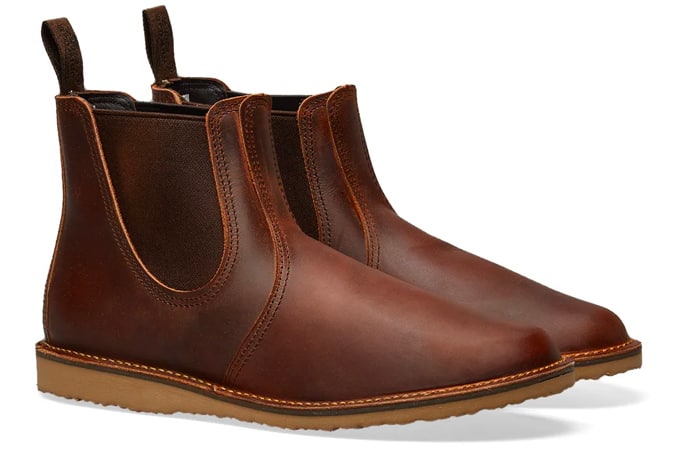