Even for men who live in trainers, there’s a certain excitement that comes with stepping into ‘proper’ shoes. Particularly when they’re as storied as the brogue. The style’s distinctive perforations were designed initially as an escape valve for bog water, favored by Irish farmers who spent half their working day stomping through submerged fields.

For much of its life, the best brogues for men stayed firmly in the country; appropriate for hikes, never in town. But in the 1930s, the then-Prince of Wales (future king and style icon) adopted the style for golf, pairing his with a grey lounge suit. The holes were suddenly seen as decorative, not practical, and the brogue went on to become a flamboyant staple in jazz clubs.

Although broguing is most common on Oxford shoes, because the moniker refers to the perforations, not the construction, examples are almost limitless. Heritage British shoemaker Grenson even teamed up with Boston-based New Balance on a brogued sneaker, all holey, caramel leather, but with a running shoe’s midsole and shape.

This variety has helped the brogue become one of the most versatile shoes in men’s wardrobes; depending on the construction and level of decoration (as a rule of thumb, the busier the toe cap, the less formal the shoe), it wears with everything from a suit to shorts, everywhere from the office to beer gardens.

That longevity and versatility means it’s worth investing – no other type of shoes in your wardrobe will get as many outings or last as long, which brings the cost-per-wear down to pence.

Ready to put your best foot forward? Here’s what to look for when shopping for your next pair and all the brands worthy of your hard-earned.

Not all brogues are wingtips, and not all wingtip shoes have to be brogues. Confusing? A wingtip is defined by the ‘W’ or wing-shaped piece of leather that overlaps the toe area of the shoe – as long as it has that, it’s a wingtip. However, most brogues tend to feature it, hence the confusion. Also known as a full brogue they come in all manner of shapes, from more casual Derby shoes to suit-ready Oxfords and even two-tone styles that wouldn’t look out of place on the feet of a 1950s jazz band.

Don’t want to go the whole hog? A semi brogue does away with the additional fanciness of the wingtip and often comes in Oxford format, meaning with its closed vamp it’s inherently smarter. As a result the semi brogue could be the ideal work shoe – it’s smart enough for boardroom meetings yet has all the character of a full brogue.

The quarter brogue is very similar to the semi, yet it takes things in a more minimalistic direction by removing the perforated ‘medallion’ on the toe cap. What you’re left with is the most formal of all brogue styles, especially when rendered as an Oxford. Wear this style strictly with your finest suits and think special occasions – weddings, job interviews and graduations are all fair game.

We’re getting into the nitty-gritty now. A longwing brogue is essentially a simpler version of the regular wingtip brogue. The only difference is a straight line with the wingtip extending across the entire side of the shoe, rather than trailing off. Look for one with a chunky rubber sole and wear all throughout winter.

WHAT TO LOOK FOR WHEN BUYING THE BEST BROGUES FOR MEN

The reward of shoes that go with pretty much anything, anywhere only comes with picking the right pair. “Look for real leather linings and uppers wherever possible,” says Steffan Stafhill, founder of English footwear brand Northern Cobbler. “Synthetic materials won’t react to heat and sweat, meaning they’re less likely to mould to your shape and less likely to be comfortable in the long run.”

Most brogues are made from calf leather, but depending on how formal you want to go, you can swap the tried and tested out for a suede variation, though these are not best suited to treading the soggy marshes.

You don’t need to be a master cordwainer (the official name of a shoemaker rather than ‘cobbler’ which simply repairs them) to be able to spot a well-made stomper.

The gold standard is Goodyear-welting, a method of attaching the sole to the upper that leaves a tell-tale stitch mark where they meet. As well as making your brogues more durable, it also means a cobbler can easily switch the soles out when they get too worn. Vital, considering a decent pair should last long enough to hand down to your kids.

The first brogues most men own are often tan in colour. That’s because relaxing style rules mean in the present-day brown isn’t just for the town, but the office, too. While this is a good entry shade, a navy two-piece with dark brown versions makes for an equally handsome and boardroom-appropriate look.

Once you’ve got that look down, graduate to a sleeker black version and even brogue boots to benefit from easy pairings with both dark denim and suits.

If the shoe fits, wear it. If it doesn’t, head to Myrqvist. The Swedish brand has been quickly rising to the top in the shoe world, with no exceptions for their entry into best brogues for men. Handcrafted in Portugal using only high-quality materials (which never raises the prices) we are always pleasantly surprised at the affordability of the range.

We’re particularly fond of its suede styles, which allow you to incorporate some subtle texture and color into your footwear game.

Grenson was the first shoemaker to use the Goodyear-welted construction technique as far back as the mid-1800s, and its innovation didn’t stop there.

For a contemporary update, the heritage firm also produces brogue styles with a contrasting rubber wedge sole that still holds on to all the details of the classic shoe. 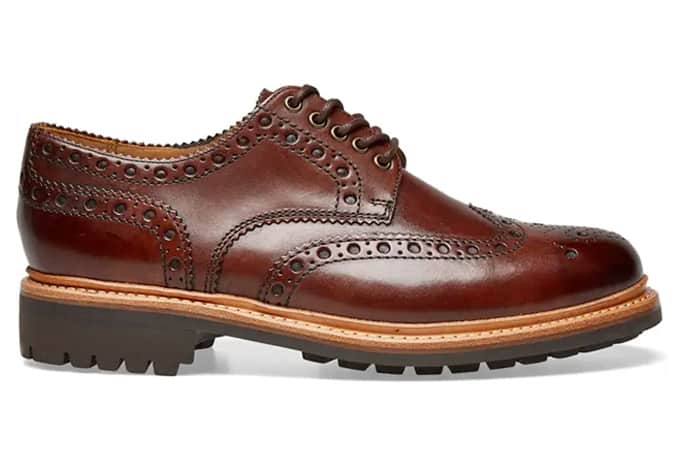 While dress shoes are often rightly referred to as investment pieces, department store offerings aren’t to be overlooked.

High street stalwart Marks & Spencer wins on both style and price, with a wide offering that includes almost every style of the best brogues for men listed above in every wearable color. It even stocks a vegan brogue if you’re interested. 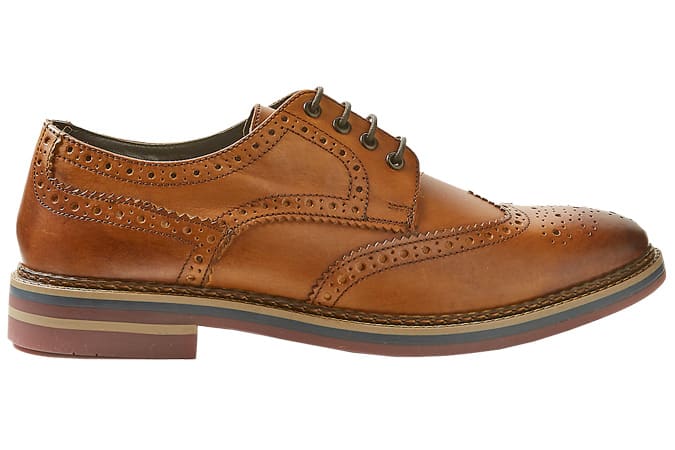 Buy a pair of Tricker’s best brogues for men and you can give your card details confident that you’re buying from one of the oldest British-made shoemakers in the country. Some 260 steps are involved in their hand-made construction, which is why you’re paying more than you would on the high street.

Walk away in some of the best traditional-looking brogues, ever. 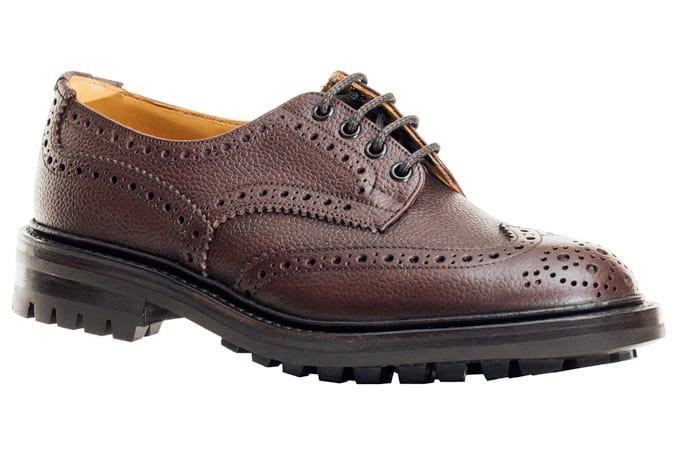 A welcome halfway house between expensive hand-made shoes and too-cheap high street options, Oliver Sweeney is a tempting mix of accessible prices and traditional practices. Its shoes have been made at the same Italian factory for the last 20 years and feature hand-picked leathers and other top-drawer materials.

A little dandier than some of the brands on our list, these best brogues for men tend to be especially decorative.

Another legendary Northamptonshire shoemaker with more than a century of know-how behind it, Church’s makes proper shoes the proper way (at proper prices we should add). Its wide range of the best brogues for men cover every type and color you’ll care about and if that doesn’t give you enough confidence, perhaps this will. James Bond gets his shoes here. 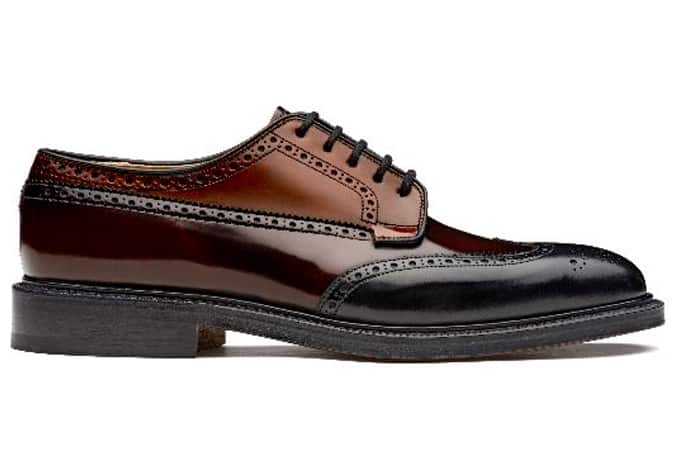 Crocket & Jones have been in business since the 1870s and even now, the company boasts of the eight painstaking weeks it takes to make every pair of shoes it sells.

Few brands do elegance like these guys (the Prince of Wales gave them a royal warrant in 2017) so they’re especially good for more formal styles like a quarter brogue. 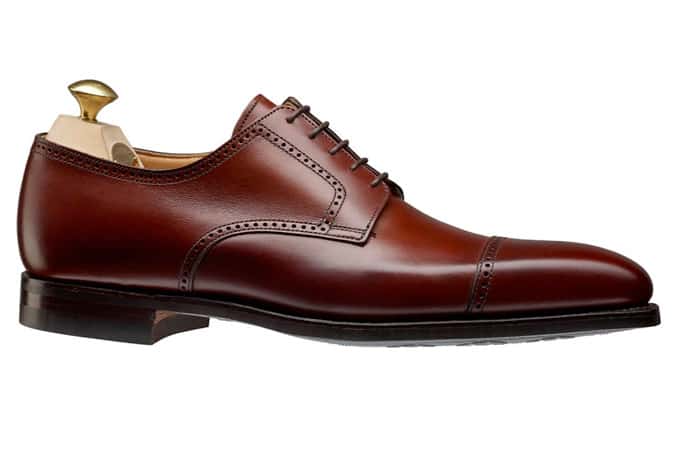 Sitting at the sartorial intersection between quality and affordability since 1995, Base London has produced high-quality brogues for more than two decades.

The British brand makes this list for the sheer volume of models on offer, running the gamut from hi-shine leather to styles with check fabric panelling.

Want to get in on the best brogues for men game without giving up your casual lean? Hunt out a sleek pair of shoes from Ted Baker.

The British brand regularly fuses classic design sensibilities with modern touches like contrasting laces or iridescent leathers for a finish that will do anything but blend in.

Sir Paul Smith doesn’t do boring. Even the most traditional smart shoes get a twist or a pop of colour when they come out with his name on them, and the same is true of his eponymous brand’s best brogues for men.

Look out for contrast (and comfortable) rubber soles, two-tone leathers and other touches that will make your feet stand out. 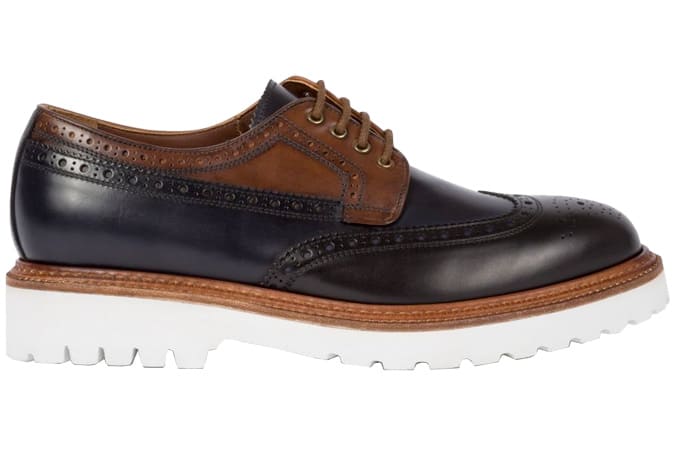 Twenty years on the British high street (and in 10 other countries around the world) teaches you a lot about what the average guy wants to wear on his feet. That’s evident in Dune’s people-pleasing collection of brogues, which span old favorites like chocolate brown wingtips right through to rubber soles, unconventional colors and even a brogue monk strap or two. 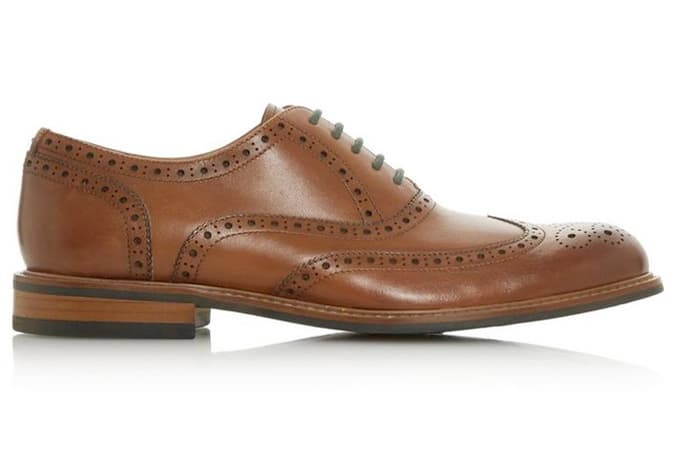 Less formal than standard smooth leather, but no less natty, grained leather offers a tactile take on the standard best brogues for men.

American luxe label Thom Browne uses a longwing style, where the broguing on the toe extends round to the back of the shoe. The brand’s signature tri-colour even makes an appearance as a heel pull. 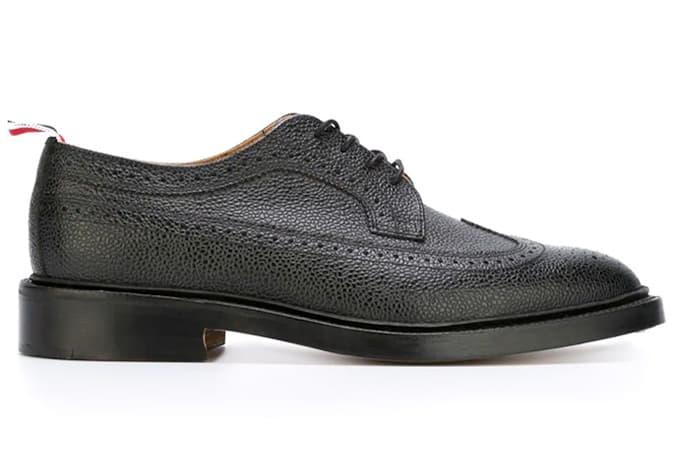